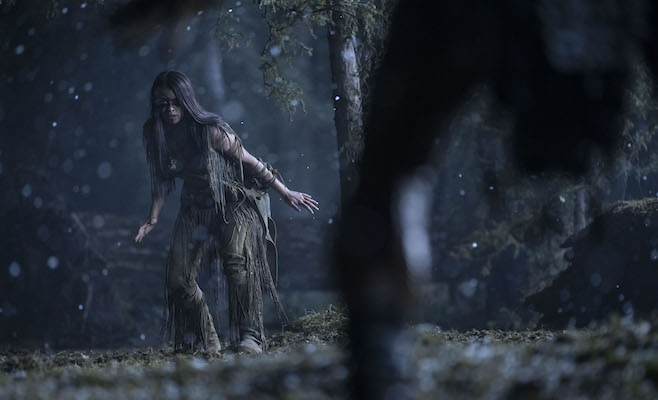 What made 1987’s Predator such a unique and endearing film was its simplicity. An alien hunter comes to Earth to hunt and comes across a group of military-trained mercenaries on a rescue mission. Finding a new target to hunt, the creature picks them off one by one until the last man is able to best the creature. That was 35 years ago, and there has never been a film in the franchise that has come close to recreating that level of tension and wonder — until now. The Hulu exclusive Prey is not only the best film since the original, in many ways it’s actually better. It took almost 40 years, but finally, 1987’s Predator has met its match.

Prey stars Amber Midthunder as Naru, a young 18th century Comanche female who wants to be a hunter, even as the tribe demands she be a gatherer like the other women. The war chief underestimates Naru’s hunting abilities, and her skills with a hatchet, and only her brother, Taabe (Dakota Beavers), knows she has the skills needed to succeed. When an alien ship appears in the clouds and drops off a predator, Naru is the only one who knows that there is a monster in the forest, and she and her dog have to protect the tribe at all costs. 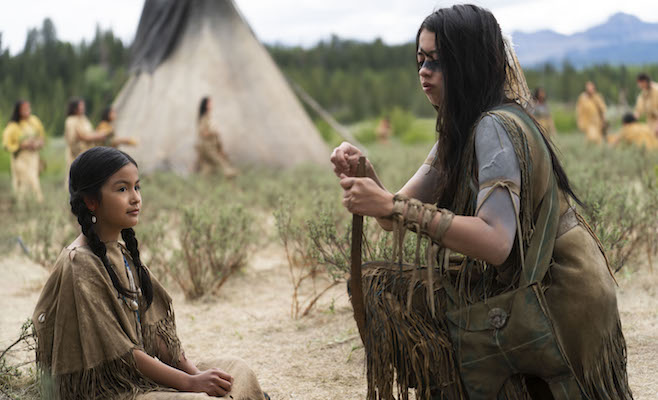 Prey keeps to the same simple setup as the original film, but it excels in every way by padding out the experience with allegory, metaphor, and history. Director Dan Trachtenberg (10 Cloverfield Lane) chose to cast the film with indigenous actors, which created a wonderful sense of realism. Naru’s rise from gatherer to hunter is told with a careful hand, and Trachtenberg peppers the film with scenes of predators vs. prey, including one scene that starts with an ant being hunted and killed by a rat, who is then hunted and killed by a snake, who itself is then killed by the Predator.

The Comanches are also being harassed by French fur traders, who set up traps in the tribe’s hunting grounds, and it leads to issues as Prey goes on, culminating in a confrontation between trappers, hunters, and predator. 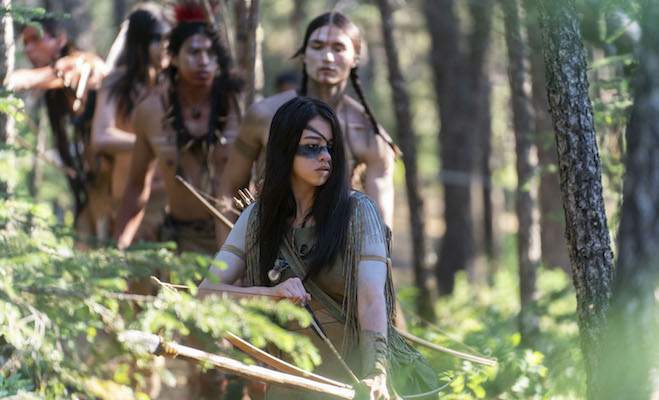 The Predator itself seems to different. Commercials for Prey tout this as “Predator’s first hunt on Earth,” and its tools are more primitive than what we saw in earlier films. The creature can still camouflage itself with light-bending technology, but its now classic three-dot shoulder cannon has been replaced by a three-dot harpoon launcher. It still has other gadgets, of course, but when it comes face to face to Naru, the hunter, it doesn’t consider her a threat — which is a big mistake.

It might be a stretch, but the creature itself looked drastically different. Its helmet looked to be made of bone, and when unmasked, its eye placement and four-pronged mandibles seemed…off. In the week between watching the film and writing this review, I’ve wondered if that was intentional. As if this Predator was an outcast, possibly deformed, and he was dropped on Earth because the Predators don’t consider 18th century humans to be much game. Add to the fact that the creature hunts even the smallest creatures — like the aforementioned snake — and collects their skulls. A seasoned Predator wouldn’t waste its time with small fry like that.

In a way, Naru and the Predator are two sides of the same coin, each trying to be something more than what their respective cultures want for them. I could be wrong, but it lines up nicely when you think about it. 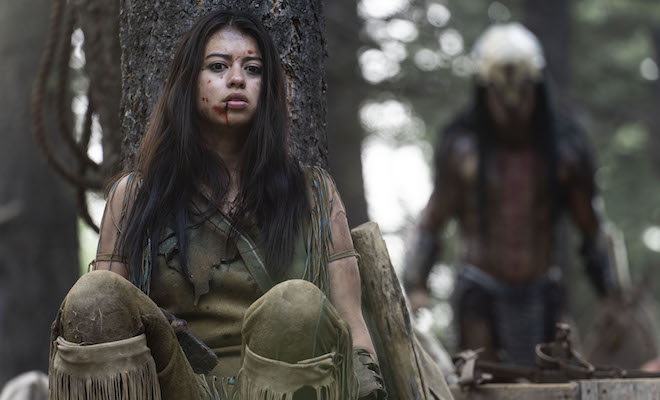 Amber Midthunder (FX’s Legion) carries Prey mostly on her own and she does it better than Arnold Schwarzenegger did in 1987. Arnold, back then, was an established action star, loaded up with muscles and one liners. Midthunder owns every scene she’s in, and commands the camera — and the audience — to focus on her. And like her battle with the creature from the clouds, she is up to the task.

It would be too easy to dismiss Prey as a “girl-power” film, mostly because Midthunder’s Naru is someone to be admired by everyone. She outwits and overcomes a monster that wrestles a bear and wins, and she even bests Arnold Schwarzenegger, who never actually killed his adversary. And she does it with flint-tipped arrows, a hatchet, and a dog.

The script by Patrick Aison, based off a story co-conceived by Trachtenberg, doesn’t try to be more that what is needed. This franchise works best when it focuses on hunter and hunted, and doesn’t try to expand mythos or add new wrinkles (looking at you, predator dogs). That’s what makes Prey work so well; it doesn’t reinvent the wheel — it just shows us how the wheel came about. 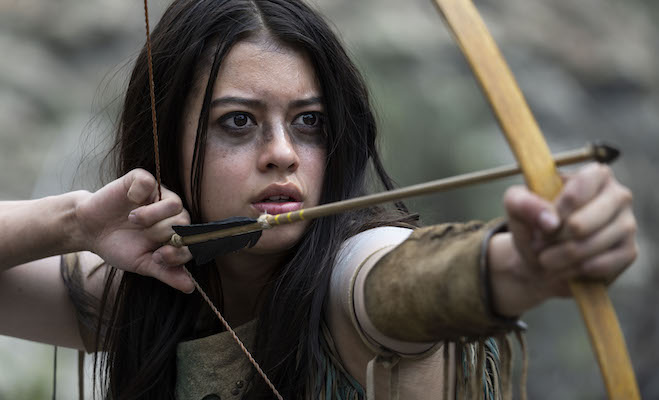 The biggest shame about Prey is that is a Hulu streaming exclusive and was not released in theaters. The scope of the film, and the subject matter, begged to be seen on a big screen, and the decision to keep in on small screens hurts what should have been a summer blockbuster. I mean, I’m glad I can watch it again and again at my discretion, but I would have loved to see this in a packed theater with other fans.

Prey is a tense, atmospheric, action-packed adventure that restores glory to the Predator franchise in ways no other sequel could come close to. After almost 40 years and seven films (including the two Alien vs. Predator films), Dan Trachtenberg and his star, Amber Midthunder, throw down the gauntlet on this franchise and challenge any future director/actor to carry on the story.

Personally, I would love to see more of Naru the Hunter vs. the Predators, and the unique mid-credits “scene” portends that we might. Until then, my TV will be streaming Prey on Hulu any chance I can get, as with each watch, I find something new to love about the film, and I’m confident you will too. And for a unique experience, watch the film in the native Comanche language, which is an option through Hulu’s language settings.

Prey is rated R and is available to stream exclusively on Hulu.